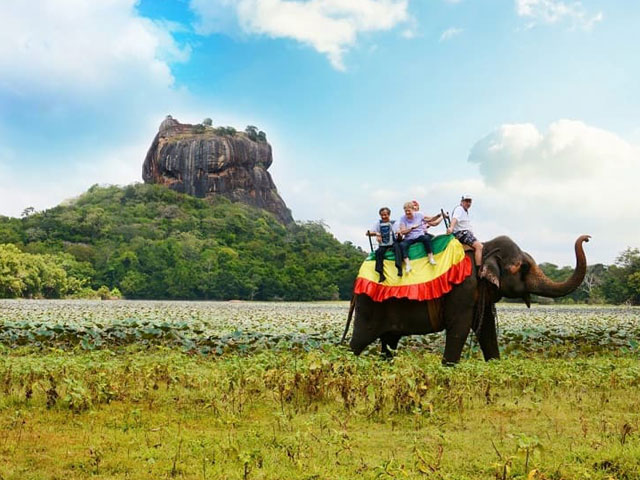 North of Dambulla, the spectacular citadel of SIGIRIYA rises sheer and impregnable out of the denuded plains of the dry zone, sitting atop a huge outcrop of gneiss rock towering 200m above the surrounding countryside. The shortest-lived but the most extraordinary of all Sri Lanka’s medieval capitals, Sigiriya (“Lion Rock”) was declared a World Heritage Site in 1982 and is the country’s most memorable single attraction – a remarkable archeological site made unforgettable
by its dramatic setting.

Inscriptions found in the caves that honeycomb the base of the rock indicate that Sigiriya served as a place of religious retreat as far backas the third century BC, when Buddhist monks established refuges here. It wasn’t until the fifth century AD, however, that Sigiriya rose briefly to pre-eminence in Sri Lankan affairs, following the power struggle which succeeded the reign of Dhatusena (455–473) of Anuradhapura. Dhatusena had two sons, Mogallana , by the most pre- eminent of his various queens, and Kassapa , his son by a lesser consort. Upon hearing that Mogallana had been declared heir to the throne, Kassapa rebelled, driving Mogallana into exile in India and imprisoning his father. The legend of Dhatusena’s subsequent demise offers an instructive illustration of the importance given to water in early Sinhalese civilization. Threatened with death if he refused to reveal the whereabouts of the state treasure, Dhatusena agreed to show his errant son its location if he was permitted to bathe one final time in the
great Kalawewa Tank, whose creation he had overseen. Standing in the tank, Dhatusena poured its water through his hands and told Kassapa that this alone was his treasure. Kassapa, none too impressed, had his father walled up in a chamber and left him to die.

Mogallana, meanwhile, vowed to return from India and reclaim his inheritance. Kassapa, preparing for the expected invasion, constructed a new residence on top of the 200-metre-high Sigiriya Rock – a combination of pleasure palace and impregnable fortress, which he intended would emulate the legendary abode of Kubera, the god of wealth, while a new city was stablished around its base.
According to tradition, the entire extraordinary structure was built in just seven years, from 477 to 485. The long-awaited invasion finally materialized in 491, Mogallana having raised an army of Tamil mercenaries to fight his cause. Despite the benefits of his impregnable fortress, Kassapa, in an act of fatalistic bravado, descended from his rocky eminence and rode boldly out on an elephant at the head of his troops to meet the attackers on the plains below. Unfortunately for Kassapa, his elephant took fright and bolted at the height of the battle. His troops, thinking he was retreating, fell back and left him cut off. Facing certain capture and defeat, Kassapa killed himself. Following Mogallana’s reconquest, Sigiriya was handed over to the Buddhist monks, after which its caves once again became home toreligious ascetics seeking peace and solitude. The site was finally abandoned in 1155, after which it remained largely forgotten until being rediscovered by the British in 1828.

Rising dramatically from the central plains, the enigmatic rocky outcrop of Sigiriya is perhaps Sri Lanka’s single most dramatic sight. Near-vertical walls soar to a flat-topped summit that contains the ruins of an ancient civilisation, thought to be once the epicentre of the short-lived kingdom of Kassapa, and
there are spellbinding vistas across mistwrapped forests in the early morning. Sigiriya refuses to reveal its secrets easily, and you’ll have to climb a series of vertiginous staircases attached to sheer walls to reach the top. On the way you’ll pass a series of quite remarkable frescoes and a pair of colos sal lion’s paws carved into the bedrock. The surrounding landscape – lily-pad covered moats, water gardens and cave shrines only add to Sigiriya’s rock-star appeal.

Climb the towering rock outcrop of Sigiriya, home to the fascinating remains of one of the island’s former capitals, complete with ancient graffiti, elaborate water gardens and perfectly preserved frescoes of voluptuous heavenly nymphs.

Expand/Close
Can we change the tour arrangement?

You can request to our Guide. He will definitely accept your request if it is possible in the travel duration.

For a full refund, cancel at least 24 hours in advance of the start date of the experience.

Do you provide WiFi / Internet for transportation?

Yes of course. We give you complimentary WiFi/ Internet access During the Travel (Subjected To Availability)

The legacies of colonial Colombo’s garden roots are still very much intact along its often-shady boulevards. Fort is a compelling place thanks to ongoing restoration of its landmark colonial architecture...

The legacies of colonial Colombo’s garden roots are still very much intact along its often-shady boulevards. Fort is a compelling place thanks to ongoing restoration of its landmark colonial architecture...